This is a tutorial on how to make the "Cap of St Birgitta," a coif seen in Medieval Europe from the 15th century through the 15th (and possibly early 16th) centuries. This is based on the one extant example as well as various period visual sources. You can read my previous posts on the cap for more information here or here, or you can visit Medieval Silkwork (where I first discovered the cap).

I love this cap, it is perfect to wear on its own or under hats and veils. It keeps my hair clean all weekend (if I wear it) and helps my outfits look "right". If you have any questions, please leave comments!

To cut based on your head measurement, measure your head around with the measuring tape going from your hairline in front (forehead) to the nape of your neck (this is where the cap will sit when being worn). Divide this number in half and add .5” for seam allowance.

NOTE: Your two pieces do not have to be perfectly square. Two rectangles of the same size will also work (especially if you have short or thin hair). If you do go with a rectangle, the long side should be oriented upright to follow this diagram.

Ties/Loop - Cut about 60-70 inches of 2 inch wide strips for the ties. If you have to cut several lengths to get sufficient length, sew the ends together to make one long strip. 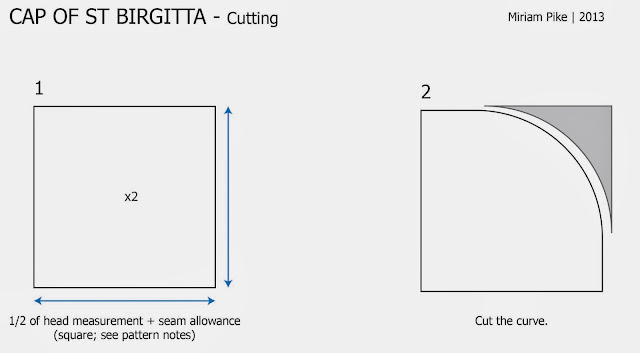 2 Now round one corner of both pieces as shown above. This does not have to be a perfect curve, but try to avoid sharp turns.

3 Sewing - Sew both sides of the cap together along the edge you have just curved as shown. Start at the edge on one side and stitch down to 1.5-2” from the edge on the other side. Finish this seam by pressing the seam allowance away from the seam on each side and sewing down.

Optional Embroidered Seam: The extant cap has an inset embroidery replacing this seam that connects the two halves. If you want to try this out, work your embroidery stitch in place of the seam. Check out how these tutorials for the embroidery: 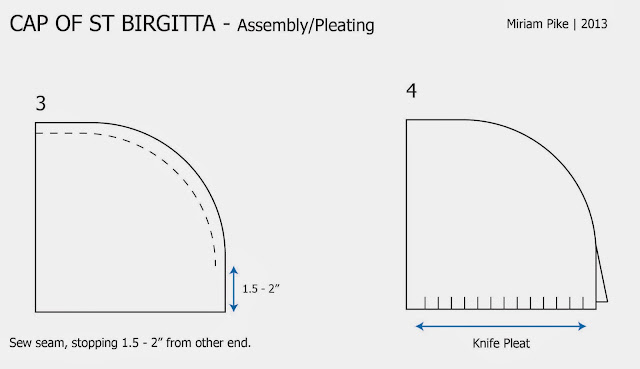 4-5. Pleating - Now that the top seam of your cap is sewn, you will be pleating the bottom edge of the cap. This is the square edge of the cap on either side of the gap you left when sewing the top seam (shown with the blue arrow above). I usually do stacked knife pleats (one on top of another); you want the finished pleated length to be between 2-3”. A depth of .75-1" pleats works well for me in a medium weight linen. Once you have the pleats arranged, either baste or pin them to keep them in place while you sew on the ties. You will have a corner at the front of the cap (away from the seam), either round the corner off slightly, or make one last pleat that is tucked sideways to make a continuous line as you see in figure 5.

For information on how to pleat fabric and other options for pleats, try the Elizabethan Costuming Page 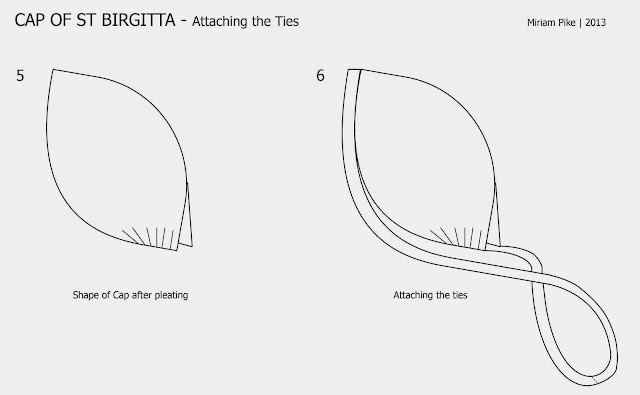 6 Attaching the ties - Now, take the strips you cut earlier, these will be your ties for the cap. If you have not already done so, make sure your strips are sewn together to form one long strip. Now, iron your strip with these 2 steps:

1) fold the edge over on each side by about 1/4 inch and iron
2) fold the strip in half and iron again.

Once that is done, pin the tie/loop around the raw edge of the cap, and begin stitching it down. I usually start at the center front and stitch one side and then the other. If you have not yet rounded the corner at the front of the cap, you will need to do that as you sew on the tie. Stop stitching once you reach the gap at the back of the cap after the pleats. Sew the ties down on the other side of the cap (starting from the center front) the same as the first side.

7 Finishing - When you are done with that side, try on the cap and figure out the length your ties need to be. To try on your cap, the ties should crisscross in back of your head under your bun/hair, and cross to your forhead at the front of the cap. There they crisscross and the last loop lays on the back of your head over your hair The key to this cap is a fairly snug fit. Linen stretches when warm so it will loosen gradually as you wear it. This is fairly easy to make smaller later if you need to change the size. Pin the ends of the ties together once you have found a length that works for you. Take the cap off and sew the ends of your ties together at the point you marked. Now sew the tie closed along the length of the tie. 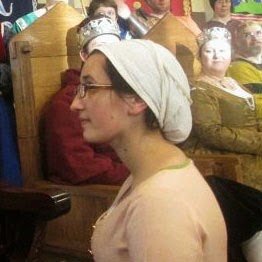 Wearing the Cap
Since the cap spans a range of several centuries, you have a fairly broad range of things to wear it with. I generally wear my cap with my 14th/15th century garb as it completes the outfit so well. I generally braid my hair in two braids and either pin or sew it back and forth at the back of my head to fill out the cap. I have put my hair up in a straight bun before, but I find it pokes the cap out at the back, rather than filling it out nicely.

Over the Cap?
The cap also makes a fabulous foundation layer for other headgear. In addition to being worn on their own, caps were worn under veils (as seen in these Italian images) and hats. With a couple of hat pins/straight pins at the ready, you are all set!

P.S. I love seeing finished caps! So link to yours if you have pics.

Thanks for your tutorial, this is the most clear and complete instruction I have found so far. You answered several questions not found in others, such as how long is the loop, how do I fit it, how to treat the front corner, etc. I'm definitely going to try this style cap. Thanks again!

Thanks Susan! Let me know if you run into any issues with the instructions!

I just love this Coif! thanks for this helpful tutorial. I have one question on the pleating instructions. Is the 2-3" for each side of the hat, so its 4-6" altogether, or is the 2-3" for the entire pleating area, on BOTH sides of the hat?

for anyone wondering about the total amount of pleating. It works to have the 2-3" being on each section of the hat. I did it with 2".

Sorry for the delay. I have been moving and lost track that you had asked a question. Yes, 2-3" on each side is what I do. I probably end up closer to the 2" mark as I have a fairly small head. Hope your cap turned out well!

This is really awesome and beautiful.
Thank for this sharing.
Cap printing online

At the beginning of your post you state the cap is found "in Medieval Europe from the 15th century through the 15th (and possibly early 16th) centuries."

Assuming that is a typo, what should the earliest it is found be?

It's based on the extant cap of St. Birgitta from Sweden and she lived from early 1300's to 1370-something, so 14th century is correct. Must be a typo. Love this hat!

This article is really awesome for increasing skill of concern department you have mentioned different things in it. Towel Digitizing in different is possible via using our service.

fashionothonoffer big brand deal for you on all products of electronics,fashion wears,smartphones,kitchen and home appliances let's visit now on best online shopping site in India
fashionothon.com

This article has helped me in understanding this. Keep Writing! You can also check our blog : Caps printing

This Coif is amazing! Thank you for making this tutorial available. Please take a look at the custom flex fit hatsin a wide range of colors.