I have been sadly remiss in my recent posts. But I finally have pictures of something worth posting.
These past two weeks I have been in Maine, for a family reunion. The weather has been, in general, perfectly lovely. Normally it is hot and muggy here, but it has been tolerable.
I have been spending a vast amount of time in the pool/lake, and next to air conditioning units, knitting, of course. I have worked on:
This past week I have been working on my family's loom down at the Jay Historical Society. The ladies (and gents) there were all so sweet and so glad I was working on the loom. Here is a picture in all of it's enormous glory. 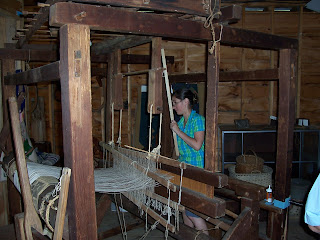 History of the loom:
The loom was made in the 1700's (supposedly, and believe me...it is old) in Massachusetts. It was brought to Jay, ME in the early 1800's (not necessarily by my family) and resided in Jay until it was used by my Great Grandfather, Jonas Godding Pike. After his death it stayed in the attic, mostly unused, and unmoved (it's so big!) until the 1960's-ish when my great uncle Stanley donated it to the society.
In recent history, it has been used by a local weaver who set it up and rigged up heddles to go with it and replaced the ropes that were dead. It has been moved several times. And two years ago a drunk on the adjacent highway crashed into it damaging one of the legs. Stupid drunk! Grrrr. My project:
I wove a rag rug (there was already a linen warp on the loom set up for a rag rug, so I re-tensioned the warp and re-used it) with cotton prints. It took me a day to repair things on the loom and replace ropes and strings, and then 2 hours total to weave it.
It took the longest time to figure out the heddles. I had the worst shed possible until I realized that they were crooked.
Now I have to take a picture of the final project. But here is the weaving in progress: 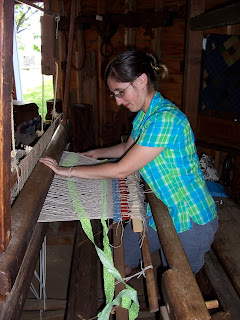 Okay, I found this on Knit and Run today. The rules are as follows: Go to Wikipedia, type in your birth month and day.
Then post the folowwing on yer blog.
3 Events
2 Births
1 Holiday
Well, I did so, on a whim (and sleep deprivedness) and came up with the following.
Events
Births
Holiday
St. Aidan of Lindisfarne, patron of firefighters feast day.

In other news, I recieved my swap package from England in the Handspun/Handcraft swap. I love the package! S sent me some lovely handmade jewelry and a journal for my spinning, already in use. She sent a lovely set of shell earrings. 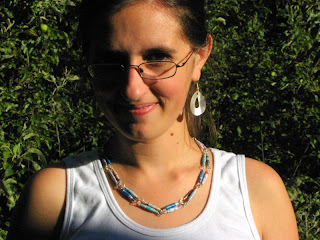 Two other sets of earrings: 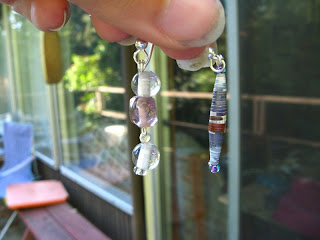 And Two lovely bracelets to match: 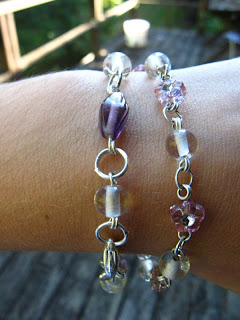 "Thou Shalt Not Covet Thy Neighbor's Shed"

I promise to post several times in the next few days. Really I do. I have been bogged down with finals and black sheep gathering for the past few weeks.
First on the list of updates, however, is my finished weaving project. I made 4 1/2 yards of fabric at 58" wide for weaving this past term in a double plain weave. It was quite a chore.
In the end I am quite happy with the result:

Next time I get around to posting: "The Trials and Tribulations of Black Sheep" and "My New Swap Package of Coolness." 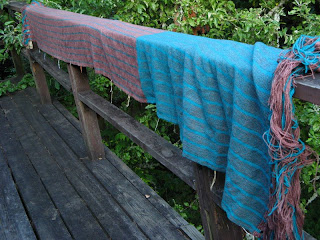 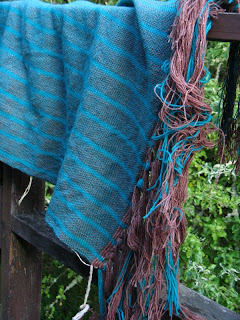 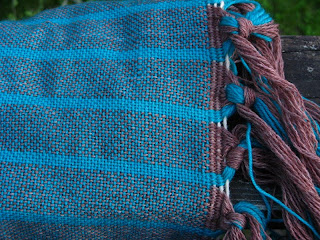