Update 11/21/13: I have completed a new tutorial and posted it here. Also, if you are interested in Italian versions of this cap, check this post out.

For Egil's this summer I decided to start trying to make myself period head gear. I had been reading the Medeival Silkwork blog and saw her information on the cap of St. Brigit and I decided that I had to have one to go with my 14-15th century persona.

The visual sources for the cap are the Maciejowski Bible of the mid 13th century, of which, if you are interested, pictures can be found here. This source has several caps with ties looping several times over the head and the body of the cap.

Another source is the Tacuina Sanitatis of Vienna from the late 14th century. Images of the Tacuina can be found through Wikapedia here at the bottom of the page.

There are several other images of such caps which are discussed at Medieval Silkwork, but the two I have listed are the most pertinant to my persona.

There is also and there is an extant cap that looks like the pictured caps, the Cap of St. Brigit which is extensively discussed in Medieval Clothing and Textiles IV and is discussed more briefly (but very helpfully) at Medieval Silkwork.

The feature that I find so appealing as opposed to other types of caps is the bands that loop over the head and crisscross to hold the cap in place, rather than tying the strings under the chin.

My first prototype worked wonderfully for Egil's and I have made several since as gifts (and as a nicer linen one for me.

I cut my linen to fit my head (one side of the square to equal half my head measurement with no seam allowance). I later made a bigger cap out of linen, and you want a nice snug cap because the linen will warm up and stretch as you wear it. 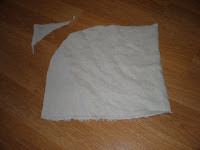 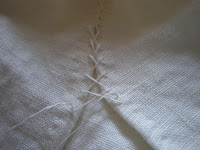 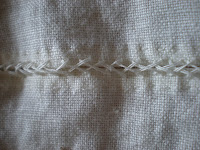 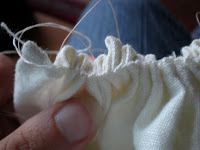 In the extant cap, the binding over the edges and the ties for the cap were done in a different fabric than the original (both are linen, but the thread counts are different for the cap and the ties) so I had a little fun and put some inkle woven trim on my cap. None of the caps I have found images of indicate that this was done in period. I did this partly because I wanted a pretty cap with a nice edging and partly because I was out of the linen I had used for the body of the cap. Plus I had just made some inkle woven trim. The inkle is sewn to the brim and then I pleated the bottom of the one side of the cap (that goes at the neck) into the trim which then also forms the ties. 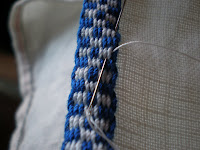 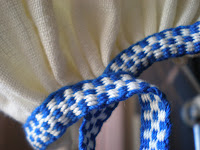 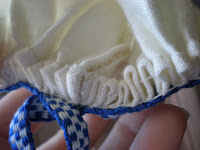 And voila! I have a nice cap to keep my hair clean (or pin a veil to) at events. This is me at Festival of the Roses in Caid knitting a medieval pouch. This is not the cap pictured so far, this was my first attempt with out embroidery and with just a plain linen band for the ties. 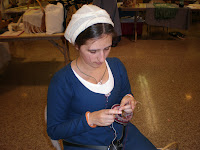 I have since been able to read the article from Medieval Clothing and Textiles IV, which has a wonderful article on this style of cap and have a few adjustments that I will be making to future caps. In the extant cap it looks as if the back seam wasn't sewn up/embroidered all the way down to the neck (pictured in other people's reconstructions and the diagrams in medieval clothing and textiles IV).
Knitted by Unknown at 3:27 PM 4 comments:
Newer Posts Older Posts Home
Subscribe to: Posts (Atom)