Who gave Miriam a webcam?!

In which Miriam learns a little about video editing, and realizes she needs learn a lot more. Also, a video in which Miriam gives up knitting for the evening as she has made another mistake.
Knitted by Unknown at 10:09 PM 1 comment:

Last month (okay, I admit it was at the end of January, but who's counting?) I went up to Madrona fiber arts festival in Tacoma. As Tacoma is just a hop skip and a jump from Seattle, I ended up spending the rest of the weekend with my Dad. All in all it was a lovely trip full of yarn, good company, and books.

Starting with Madrona (where I didn't get any pictures... but they would have been mostly blurry pictures with me going: "Squeee, sighting of Franklin Habit" etc). Much more amusing would have been pictures of "elusive sightings of the rare Rambouillet" (Sincere Sheep yarns continue to tempt me). I came home with several skeins of loveliness (for some reason in my excitement, I missed getting pictures...that will have to come later). But it was fun, I ran into FyberDuck, who I haven't seen since Madrona last year (if you haven't seen her new pattern yet on the cover of Knit Wear, it is a beautiful design: Die Cut Vest).

I also had 2 moments of squee
-Someone recognized me from The Sock Report ^_^. I don't pay that much attention to the models in knit mags, so it is neat to have someone recognize me.
-I spotted an incipient Suki in the wild! It was very amusing. We were on our way out of the hotel, and someone stopped me because she saw I was wearing Suki. She asked me what needle I had used as she was trying to figure out if she liked her gauge. Then she realized it was my design so we got to chat a little.

Then off to Seattle with Mom. We had dinner at an Ethiopian restaurant (yumm!). Dad's neighborhood on Capitol Hill has a fairly large Ethiopian population, so there are several fabulous restaurants near his house.

The next day Dad and I set off for adventure! We went to Pike place pub market (we get a kick out of all the "Pike" named places in town - my last name is Pike for those unaware) for lunch where I tried to take pictures of the view: 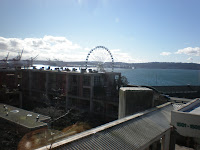 We then walked down to the Olympic Sculpture Park (if you are in Seattle, go! The statuary is amazing, especially if you like modern art). We saw this bit on the way down 1st. An inside out umbrella moving with the breeze. Appropriate to the Pacific Northwest if you are at all familiar with our weather. 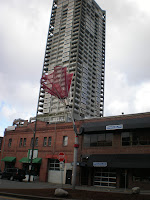 The view got better and better while we were there too. The cloud formations were spectacular. It was hard to divide my time between awe-inspiring sculpture and gorgeous vistas. 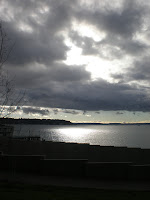 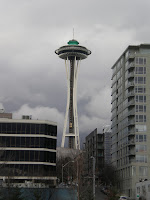 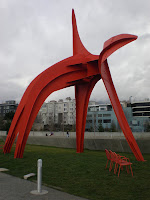 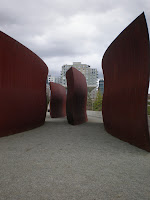 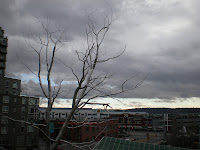 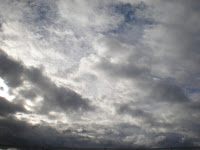 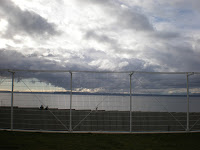 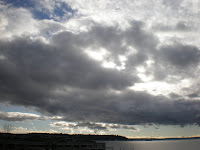 Soon I promise knitting! I have 2 new patterns that I haven't yet blogged about!