Well, I survived week one of hell. Next week, round 2. Last week was a 6 day work week for me. Saturday was supposed to be 2 hours of work, and turned into 7 instead, so I had a nice full week. This coming weekend is looking very nice.

Not much knitting has happended this week, so I have to content myself with pictures of two shrugs I knit in the past two months that I recently took pictures of. 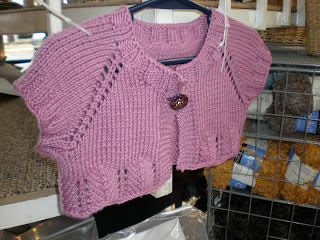 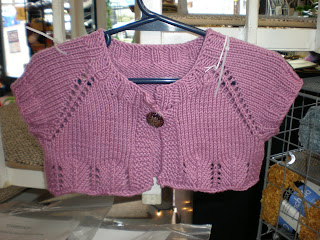 The first is a little purple shrug I made for a shop sample:
Knitting Pure and Simple #288
2 skeins Touche from Berroco
Size 6 needles 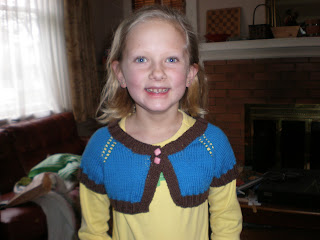 Actually, currently it looks like death by too many hours. Over the past several months I have had to contend with too few hours at work (as anyone out there who has listened to my woes knows) but the next two weeks I am working 40 hour weeks. Wahoo? Let me just say, that being receptionist at my office is one of my most hated jobs. And the receptionist is away for the next two weeks, and guess who gets her job on top of mine? A scooby snack to the first person to guess. I may have to do some serious yarn/fabric therapy next month to compensate. At least I will be getting monies.

In other news, I finished this cool project: 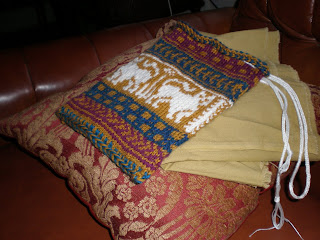 a medieval bag with charts based on those in Rutts History of Knitting. I had a lot of fun knitting it, and I think that I will make several more based on Rutts charts and other medieval charts for gifts and such. The fabric you see will be the lining. It is all that is left over from lining the skirt of my Tudor Gown. The braid is a cotton that I used a basic 5 loop fingerloop braid. And now, because I want to show off my pretty project, come more photos: 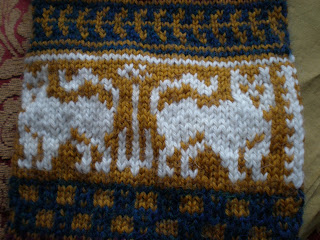 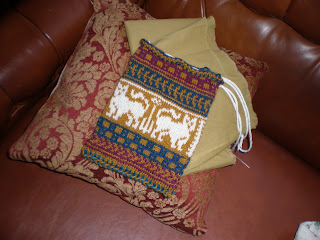 Happy Pi(e) day all! okay, I'm a little bit late. But Saturday was officially pi(e) day. There was much pie to be had. We had a bunch of people over who all brought pies (of one sort or another). Dorothy and I made Spanikopita, and a Berry Pie (I supervised as I was sick) and D made Quiche (Woot! my spelling is correct on that one). Her fella brought inverted pie in the form of bread pudding. C S and S brought cheese pie, aka cheese cake. Other peoples provided our stomachs with pizza pie, vinager pie, Greek tomato pie, and a pear claufourt (sp?) pie courtesy of K from Monday knitting. There may have been more pies, but the details are a little fuzzy (no, there was no alchohol involved this time).
There was much yumminess to be had. And L provided back rubs for the sick feeling cook.

Yes, for Saturday was full of plague. I feel mostly better today, after having slept most of Sunday. I decided to be a lump and sleep and read Goblin Hero, sequel to Goblin Quest. Funny series by the way for those in search of creative silly writing with a runt of a goblin as the reluctant hero (very reluctant). Recommended by a friend in Salem. Sick days are perfect for catching up on reading.

In work news, I finally have more hours at the Law Office. The next two weeks I even have almost full time as the receptionist is going to be out of town. I can't make up my mind whether to be thrilled or to want to run screaming. Being receptionist isn't the most thrilling esp. with an impatient boss. Who according to the mother unit, might want someone (i.e. me) to work on his website. Because I'm young, so of course I know how websites go together. On the other hand, it would be something to do when our clients don't bother to bring me the paperwork I need. Grumble grumble...

I have been knitting quite a bit while having little to no hours last month. I know have a pattern I am selling at The Knit Shop, where I work. 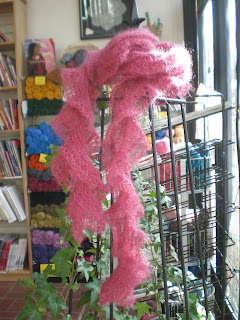 It takes one skein of kid silk haze. And it took me forever. This was initially going to be a camisole for the shop. Hahahahaha. Why did I decide to do a camisole out of a lace weight mohair? Someone should have shot me then and there. Anyways, after frogging that (oh, 6 months ago...) I decided to make a scarf as the only viable thing to do with the yarn. Then I ripped this pattern out like three times because I was unhappy with the width of the repeat. It is a ruffle scarf (I know, lots of them out right now) but I added a simple lace to the edging because I didn't like how the stockinette of other ruffle scarves curls. Plus, when you do it in a lace weight it is so much more. Here is a close up: 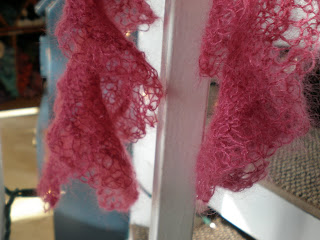 I have a skein left over (as the camisole was going to take two skeins) so I am planning on making the Ice Queen Cowl out of the remainder. How much pink do I need again?

If you would like to buy it (support my yarn habbit!):