Last weekend I went to Klamath Falls (my impression of the place is cold) for our Principality's Arts & Sciences Championship (and Investiture). I came away from this as the Principality A&S Champion, or Alpine Scholar.

For those not in the SCA, that means I presented 3 papers/projects on SCA appropriate subjects for judging and feedback.

My three entries (which you can see in the next picture) were:

1) My Housebook Dress and associated layers.
2) A paper looking at different possible pleating styles in imagery of the Housebook Dress.
3) A paper and reconstruction on 3 Italian Stockings. 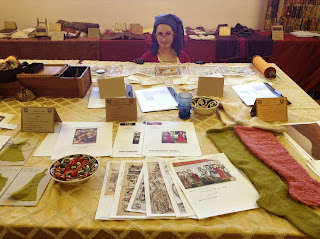 I had a great time! There were 5 other entrants, and it was neat seeing all the other projects people were working on and doing research on. Bookbinding is apparently popular right now. 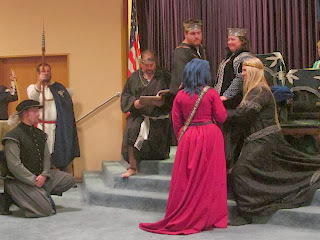 I plan on more posts on the layers of the Housebook Dress in the next month (once I have recovered from writing three papers at 4, 10 and 14 pages), so check back later!

Hi all! I have been working on a new outfit for awhile now. This one is the "Housebook" Dress based on late 15th century German clothing. I already introduced you to my new fringed hat, and the next layer on the list is my shift: 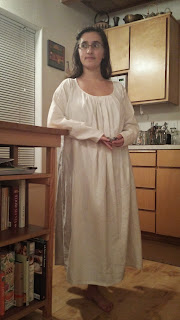 Introduction: Hemd is the German term for shift or chemise. For this outfit, it constitutes the under layer and is seen at the open front of the gown over it.

Materials: For fabric I chose a light-weight linen/cotton blend. Linen was the common fiber for undergarments, but fustian, a fabric with linen warp and cotton weft, was being produced in Germany by this time. The thread I used for construction is a modern cotton thread. 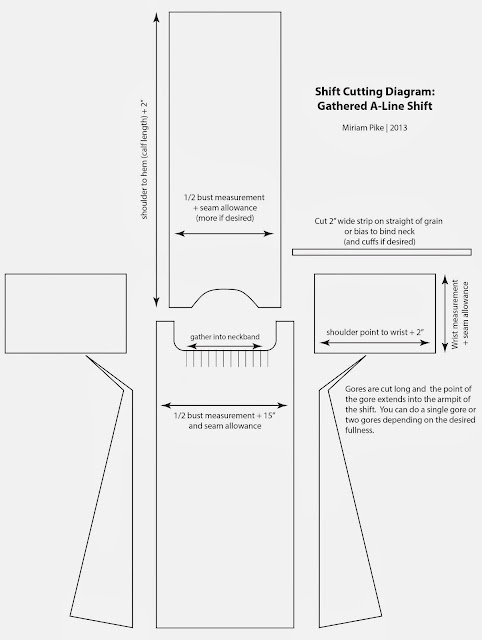 Construction: My shift is a fairly basic rectangular type construction with a gathered neck. The construction is based off of a 12th/13th century tunic that is attributed to St Francis of Assisi.

Let me know if you are interested in more of a tutorial. This post is focused more on what I based my construction on.

Note on the diagram above: The front and back shoulders should be the same width so they will match up when sewn. 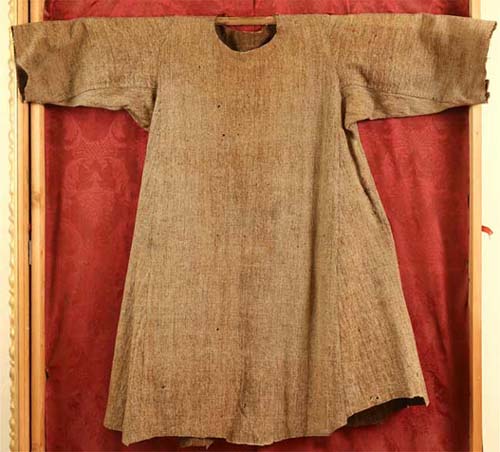 St Francis of Assisi tunic (Anonymous, Tunic) - This underarm gusset/gore construction is one of my favorites. This is a construction where the gore of the skirt is cut so that it continues up into the seam of the sleeve, rather than stopping at the waist. I find this construction on a shift avoids bulk under the arm and gives me a good range of motion.

As the neck line of the dress itself is wide and low, there is good visual evidence of the neck of the shift underneath. There are also a few images of ladies in their undergarments to support this. There are several types of necklines visible (including pleated, smocked, embroidered, plain, etc…). I chose to go for a gathered neckline with a narrow neckband.

I based the gathering on the next two images, although I went with straight sleeves like the first image, rather than the fuller ones of the second. The second set of images is of Saints and likely shows an outer garment rather than the hemd, but they show the same gathered neck.

I chose to gather the shift only in front to put all the excess fabric in the open neckline for visual effect. It is also mid-calf length on me so the hem doesn't get dirty.

I am quite happy with the finished project! And it looks great under the Housebook (even though you can't see very much of it...