Of Stays and Bodies

Well, I completed my regency outfit that I was working on to the point where it was wearable for my evening of dancing and frivolity.
The dress was mostly finished, except that I didn't bind the the bottom of my corset with bias tape (homemade!) and I didn't finish the closures for the back of the gown itself. I also still have plans to make a overgown for evening wear, but had no time to make said garment.
For my outfit I looked heavily at Jessamyn's Regency Costume Page, which is a good resource for Regency Era clothing.
My corset was based on the corset pictured in "Corsets and Crenalines," a nice source for shaping of pieces, but very difficult to use when trying to figure out the stiffening of the corset. I went with cord for my stiffening as the earlier corsets looked to have been stiffened rather than boned in regency, and relied mostly on the busk down the front for any stiffness and posture support. I am very happy with the result, but I still have some fine tuning to do. I need to bind the bottom, add pretty detail work and figure out what is wrong with my busk. I made it out of two layers of a sturdy linen. The eyelets are curtesy of the "Eyelet Fairie," otherwise known as my roommate. 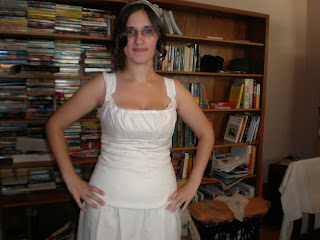 The dress is made of a silk that I got at Egil's from Gold Key this year. Its like butter, and I am in love with it. The front is gathered into the waist band and has a draw string at the top . I chose this method because the pleated fronts are later in Regency period than I wanted to go for. When I complete my lacings for this gown (I had to be safety pinned into it for the dance) I will do spiral lacing. You can't see it, but my corset it spiral laced. This is more period as cris-crossed lacing is a little later. I have found that I like spiral lacing, seems easier to lace to me. Although this corset and the Tudor Bodies are the first I have ever attempted. My Tudor bodies lace spiral up the front and back. Woot! 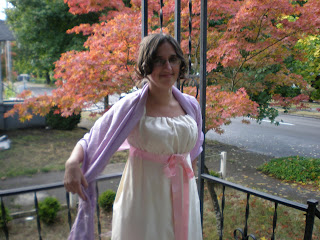 I also made a simple shift out of a cotton muslin. Pretty impressive for one weeks worth of work?
Knitted by Unknown at 12:03 AM No comments:
Newer Posts Older Posts Home
Subscribe to: Posts (Atom)