Hey, look, I figured out how to post! Why'd it take so long? Well, my digital camera had no battery life, that and well, I just haven't. But yes, pictures! What have I been doing up here in the northern waistlands of Washington?
Well.... 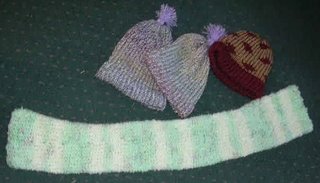 First we have a picture of the stuff I've done on the knifty knitter, or peg loom, as I like to call it. My second, third and fourth attempts at hats, which turned out pretty good. The first one I already donated, seeing as I'm making them for charity. Although the red and yellow one isn't cause my mom claimed it, and well, it is my real first attempt at multi-strand patterning ever...unless the scarf counts. That scarf has so many issues with it, and it didn't turn out at all like I had planned, but oh well, it too is getting donated, so someone will have a nice warm (almost too warm) scarf. 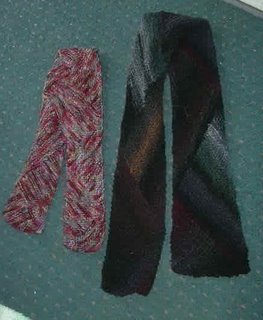 Next we have my two scarfs, the one on the right was made first, same pattern. I love this pattern, it's so damn cool and I don't get sick of it!! But the first one turned out better than the second, mostly cause of the type of yarn. And although this picture doesn't show it, both are of decent size, it's just that the first one dwarfs the second so it looks small, but it really isn't. Still don't know what I'm goinbg to do with the second scarf. 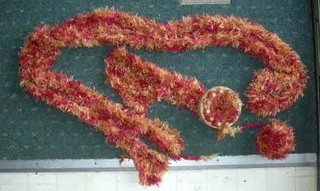 Then we have my second attempt at peg knitting a scarf, which peg knitting this yarn is a heck of a lot easier than knitting it. I couldn't see the stitches when I tried to knitt it. And that's my second scarf on the loom there, which will be wider than the first one, which is a good thing, cause you can't quite tell from this picture, but my first one is impossibly skinny AND long! It's hugely long, actually. I think it's one of those things you have to see in person.

So that's me. I'm also working on peg knitting a shawl, which I forgot to take a picture of, so I'll put that up when I'm done :) I really like knitting on these things, actually, a lot more than I figured I would.

But yes, by the way, Miriam, I like the 'wrist supports' as you put it, or someone put it, or whatever. But yes, very nice. :D
Knitted by Unknown at 5:41 PM 2 comments:

Of Mice and Cats 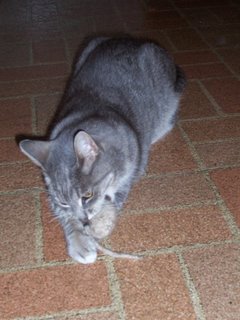 This post is a tribute to my wonderful cat. Recently I have found myself taking lots of pictures of her. In thinking upon this desire, I wonder if it stems from the worry that my cat is going to pass on sooner rather than later-she is about13 years old now and no spring chicken). I am sure she will live many more years, but I am growing more aware of her mortality. Recently she lost a great deal of weight because she lost a tooth, and she can no longer eat big cat dry food (she can still eat the kitten sized stuff). She's putting on more weight now (I keep feeding her as much as I can), but I do worry. 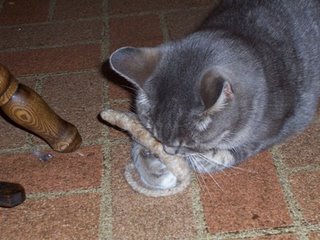 In any case, I recently put my mind to making her and Baxter (the Siamese) catnip mice. So far I have only made one, but Baxter doesn't seem to show much interest (possibly because Mayumi (my cat) has drooled all over it) and so I may not make another for him. Mayumi, on the other hand, is absolutely enamoured with the mouse. I am a bit worried that it will fall apart from her worrying over it (no pun intended) but so far it has stood up to her teeth and claws. 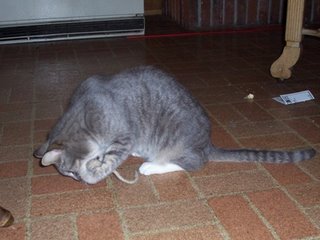 Last week Mayumi caught a real mouse... and killed it (Happy day, we have a slight problem with mice in our house right now). Mayumi deserted her mouse, and Baxter decided to play with it. Whereupon it dissappeared for two days. 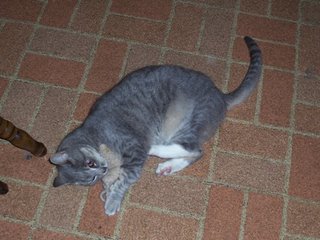 You know where it reappeared? MY BAG!
On my way to school I found it between my Chem book and my notebook. I picked it up, thinking it was a piece of yarn or lint, and to my horror, it was soft and squishy. ICK!
Thank you Baxter. 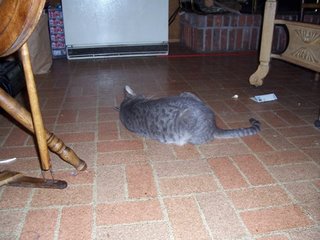 And now Mayumi is sick of me taking pictures of her, so I will entertain you with my recent knitting exploits. I finished the boucle fingerless gloves I was working on last post, unfortunately, I forgot to take pictures of them finished for you peoples. I am working more on the SKB, Asher and I both worked on ours last night at knitting, and I am finished with the lace band on the body. My Harry Potter scarf is getting longer, slowly. I am a little over halfway done. I still haven't gotten up the courage to take up my snowdrop shawl again. It just hurts so much to rip parts of projects out.
I am going now, lunch calls my name sweetly and urgently.
Knitted by Unknown at 11:42 AM 1 comment:

It's been awhile since my last post. Sorry...some times it's hard to get up the energy to take photos and use the internet, etc.
I have been working on a couple of projects, none of them the big ones though. I have been abandoning the SKB (Simple Knitted Bodice) and the Yarn Harlot Shawl. More progress has been made on the Harry Potter Scarf, I am now about halfway done, it's about time for another (better) picture of the scarf. I only work on that during class, and I seem to get about 40 rows done per class (wow!).
My latest finished project is: 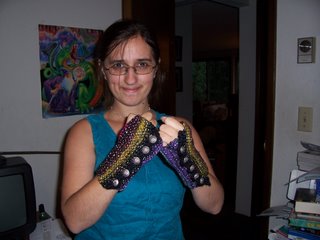 These are my Noru Fingerless Gloves which I have ripped out like 3 times and remade countless others. I like the yarn and all, but it took me awhile to find the right needle size (I settled on US 10s), and I first started them in the round. I am quite happy with how they turned out, although they were supposed to be for one of my housemates, and they are too small for her. Oh well, they're mine now! They are knit garter with a scalloped, crochetted border for the buttonholes. You can't really see the buttons, but I found some really cute ones with fleurs on them. Someone in choir commented, "They look like wrist supports." I'm feeling a little insecure about that still... 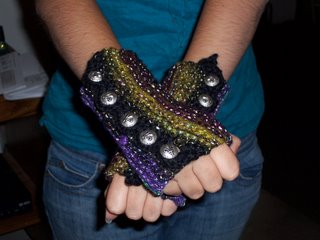 In other news, I am making a second pair out of a wool worsted and a mohair boucle (from Maggi I think), these are for a friend for her birthday, I know they don't look like much yet, but I have now finished one, and am working on the second. I'm having fun making them, and they knit up quick. The only problem is: My friend's birthday party is this Saturday, and I am halfway done with the second one. Ack! Oh well, this afternoon I am going to go to the fabric store for buttons. Yay! Field Trip. 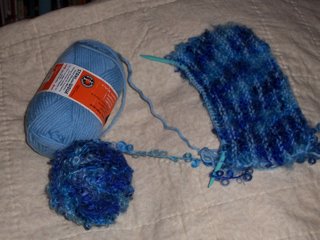 In other news: My mom came home Wednesday with 4 big bags full of black walnuts, does anyone want any for dyeing or anything? I can't possibly use that many. Please...think of my sanity.
Knitted by Unknown at 9:45 AM 3 comments:

I am now into my second week of classes at LCC. In case anyone was wondering, I am taking Chem 104. Let me tell you, this class is boring. I am really hoping that it will pick up and become more interesting. Please God! I would really like to stay awake in the class. Speaking of staying awake, here is my newest "in class" project. Sorry the lighting isn't very good, I took these pictures before I left for class, and it was at 7 am, thus bad lighting. For those of us who can't see colour very well, this is a Gryffindor scarf for moi. I have wanted one for years, and never actually bothered to make one. As fiber duck pointed out, there are patterns online that have the figurings for the correct number of stripes to do down to the stitch count and everything...but I am doing a scarf from the Philosopher's stone, not the later ones. Those are nice and chunky, like mine. I am doing this on Clover 30 cm 9s, the stitch gauge is 5 to the inch, it is in the round, and my stripes are 20 rows (in case anyone had the hankering to know the knitty gritty details, no pun intended). 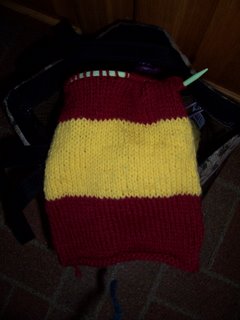 Last week I went to Dye Lots, a big mistake. I ended up coming away with this: 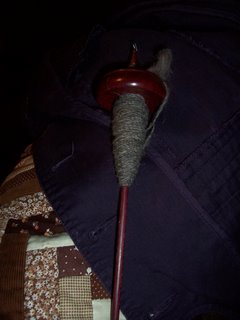 This being a spindle from Spindlewood made from purple heart. I really like it, it is nicely balanced, and pretty too! That is a big consideration when you are going to be looking at it for long hours while spinning yarn upon it. The wool on it is a grey merino that I got at the Puyallup fair this Spring. I am going to ply it with some handpainted merino, so that should be interesting.


In other news, I found this last weekend. It is a skeing of worsted wool from who knows how long ago, which I found for 10 cents at a garage sale. Any ideas? 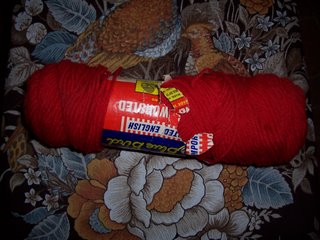