I recently (and by recently, I mean a few months ago), I cam across a beautiful Nora Gaughn pattern from Berroco's website called "Laure." Now this was a beautiful pattern with curves and angles, so I decided I needed to make it. I had 4 skeins of an Alpaca I bought on the internet in college that are about the same weight as Ultra Alpaca, so I went for it. 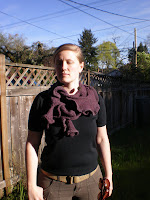 This thing was a pain. You make all the little hexagons seperately (okay, I'll give you that), and then you go and pick up stitches all along the edges of the hexagons (and here: when they say the k1 edge, they mean the selvedge edge rather than the outside of the hexagons. That was my first sign that all was not well. And, up to this point, I had been trusting that the pattern knew what it was doing. Because, honestly, I had a pile of blobs that were supposed to morph into my new scarf (I was skeptical).
Once I had that edging done (and this is the point that all the hexagons were connected) I still had to pick up and knit a ruffle edging around each and every single *@%#in one of them! And to make matters worse, I ran out of yarn close to the very end. Thankfully I was able to find a yarn with a close color match (Ultra Alpaca) and finish it. 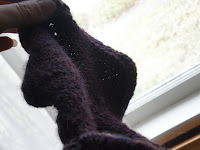 And it still looked like nothing I would wish to inflict upon even my worst enemy. It looked like a mass from outer space that had latched itself to my neck and was searching to leach every last bit of life from me. 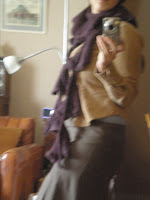 But then I blocked it. And it magically turned into something I would wear. Often even. My friend K graciously agreed to a photo shoot. I managed to get photos of several things that I have made recently but have no photos of (isn't it hard to get photos of yourself in a hat?)...no decent photos I should say. The photo above being the perfect example. So again, thank you Kelly! 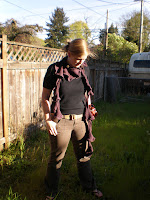 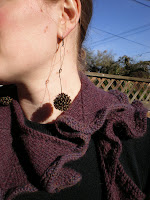 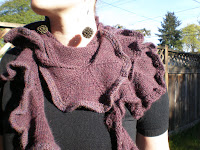 In other news, I have been making a rainbow of sheep. They are all felted, and I feel a photo shoot coming on. Rainbow sheep and....skittles!
Knitted by Unknown at 12:47 PM No comments:

I have been bad about taking pictures of finished objects. Recently I bothered my new house mate enough that she agreed to help me photograph some of my projects. I don't think I blogged the Aeolian Shawl when I finished it last year, so I need to fix that.
Project: Aeolian Shawl
Materials: 2 skeins Malabrigo Lace in shade Lettuce, US 5s (I love the Addi Lace needles by the way). And lots and lots of beads. Ravelry Link 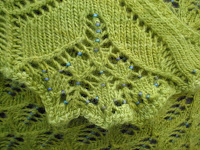 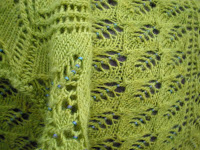 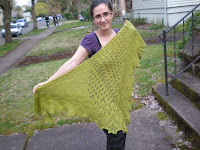 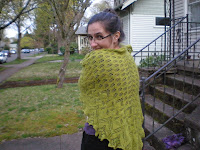 The other lace shawl I made last summer was Haruni. This was a lovely shawl. I am super happy with it. I made a smaller version with beads to get a light summer shawl.
Project: Haruni
Materials: A random cone, possibly linen/silk. Ravelry Link 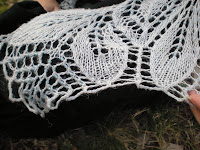 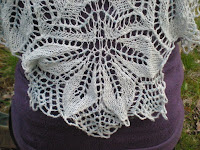 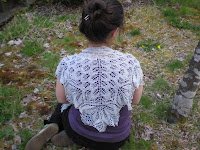 Spring is here! And, no, its not time for assassinating pigeons.
No, it is, in fact, time to make a bajillion little felted sheep. I am using the pattern A Felt Flock from Fiber Trends. I quite like this pattern. I usually end up making a felt sheep or two for
people a year. This year I decided I needed a rainbow flock to tempt people at the Norse Trade Blanket at the Egil's Skaligrimsson Memorial Tournament.
So far I have red all felted and stuffed. I have orange, yellow and green ready to be felted, and blue on the way.
I have also made a few that aren't rainbow. The natural one was made for a friend, who I am waiting for to come and collect it. The pink is going to Egil's, but for now, it is on sale at Heartwood Naturals, an Artist Co-op at 6th and Olive in Eugene. 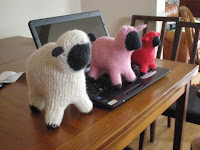 That is the project that has been taking up a good portion of my time lately. Instead of madly knitting away for me, or working on clothes for Egil's, I have been working on stuff to put up for sale at the co-op. This is an experiment. I am not hoping for a huge income. Rather, I am hoping for "Pizza Money" as my Latin professor used to put it. So, if you know any one looking for cool handmade stuff for mother's day...
Knitted by Unknown at 9:25 AM 1 comment:
Newer Posts Older Posts Home
Subscribe to: Posts (Atom)